Like many others, I’ve got a certain fascination for Studio Ghibli. The animation studio’s somewhat abstract and experimental movie Iblard Jikan is certainly not their most popular and mainstream movie, but it’s definitely a work of movie magic that is a peculiar experience to watch. 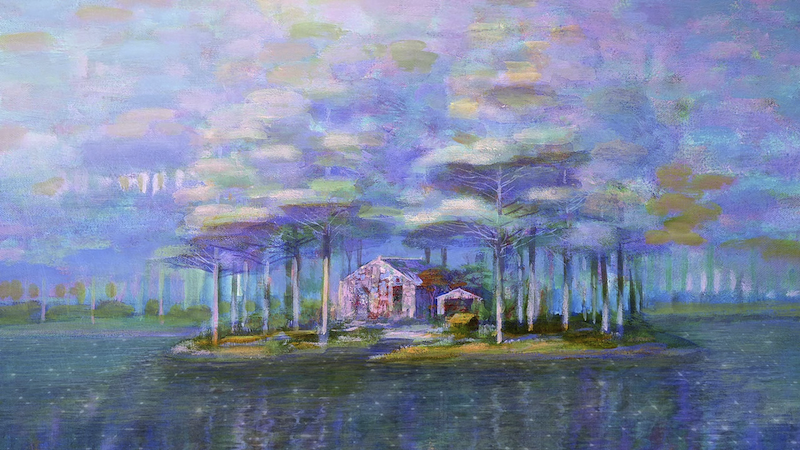 Created by Ghibli in 2009 Iblard Jikan (translated to “Iblard Chronicles” in English) is both a wonderful and slightly weird movie. One might say that it’s wonderfully weird at times. In addition, it’s an extremely fascinating show of creativity. Every scene is like a highly impressionistic oil painting, with various bits and pieces being “alive”. Naohisa Inoue is the artist behind the paintings, and he is also the creator behind the fantasy world of Iblard (イバラード). In the movie, elements of various degrees of simplicity, like people and vehicles, are animated and added into the scene. Sometimes they freeze into the painting-like style, or jump out of the painting, drawing the viewers attention. At one time, one of the characters breaks the fourth wall and “looks” directly at the viewer.

Also, it seems like the aforementioned degree of weirdness increases according to how far into the movie you get. Suddenly there are floating and flying people, miniature planets hovering about and giant, Zeppelin-like balloons that grow from plants like fruits. 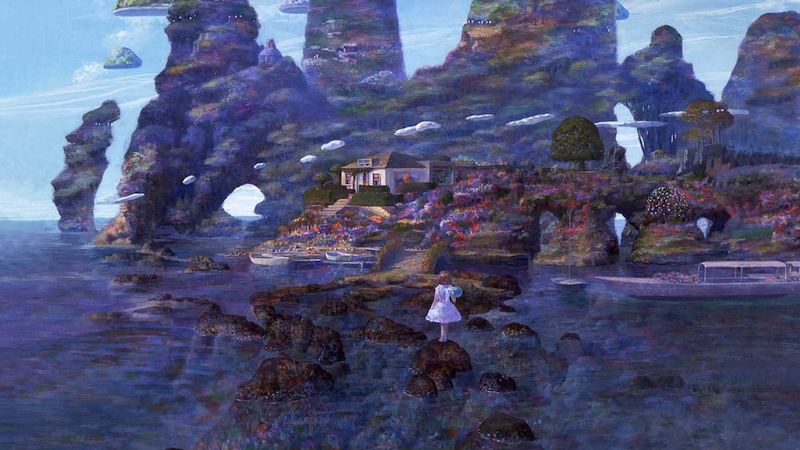 Iblard Jikan has been called an experiment in artistic skill that shows what Studio Ghibli is capable of producing. It’s only 30 minutes long, but serves as a large portfolio of different effects and animation techniques. To me, that’s one aspect of what’s interesting about this movie. The other is that by creating something like this, Studio Ghibli has made fantasy artist Naohisa Inoue’s world, which exists in his paintings, come alive to an even larger extent in the viewer’s imagination.

The visuals spark ideas and stories, and make the watching experience even more real. You simply accept that in such a world, things like this and that exist, and it doesn’t have to be a reason for it to do so. I find myself getting lost while looking in awe at the details in every scene, letting myself get tricked into believing that things that are not there, really exist. Because if you look at it with from a realistic viewpoint, it’s all just carefully assembled dots and strokes of paint. And that’s no fun. 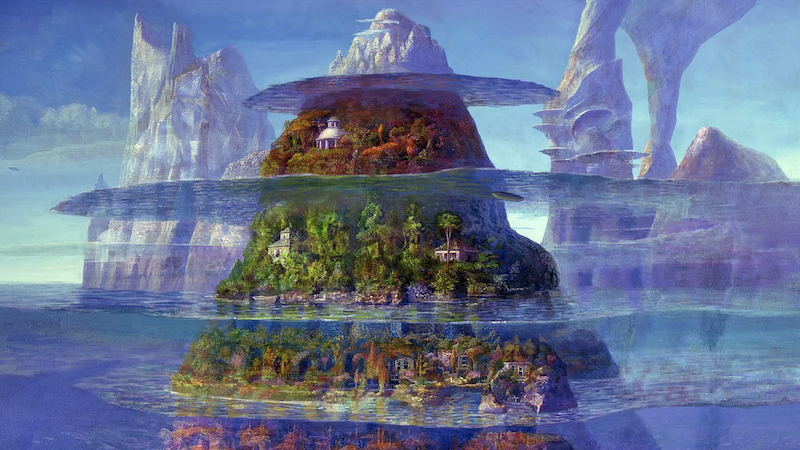 The music and sound design works very well with the movie, providing a fitting atmosphere that suits the scenery, mood, occasional people and movements on the screen. The movie is divided into 8 segments, each with its own musical piece. The music consists of mainly instrumentals with sporadic voices, increasing in intensity accordingly to… yep, you guessed it – that lovely weirdness I’ve mentioned a few times by now.

Just as a side note; my favorites among the sound effects has to be the sound of old, rattling traincars through rainy weather. 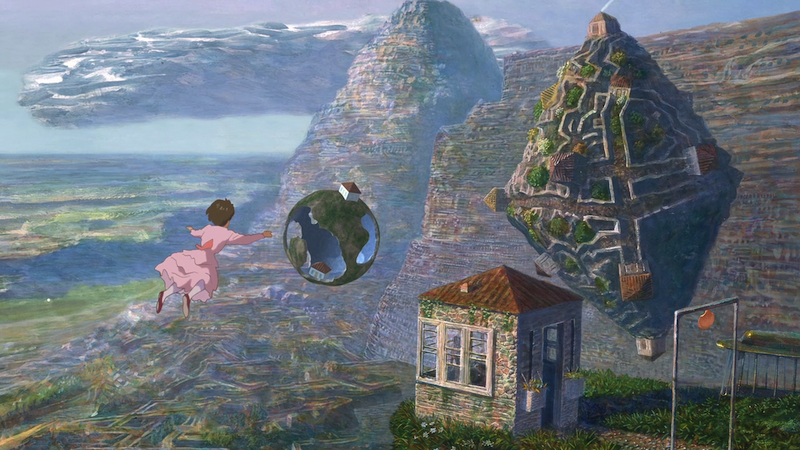 Certainly, it’s not all good. I’ve got a habit of nitpicking, and there are a couple of things I would have liked better if done differently. Just to give a neat and quick review of Iblard Jikan, here are some good and some bad things that I’d like to point out.

The good: Watching this short movie is like taking a peek into another world or dimension, one which is saturated with imagination and color. The fact that there’s no real storyline, makes the viewer think for himself. What’s the story behind this place? How do the people in this world live their lives? The music works beautifully and adds feeling and good pacing to the different segments.

The bad: Sometimes the 3D-generated elements stand out too much. For example, some of the vehicles look very much out of place. The movie is also a bit on the short side. I would’ve liked to see more of this fantasy world. Also, people who’re not fond of surrealism might not like Iblard Jikan due to all of the weird things that happen.

Finally, if you’ve watched this movie, or I’ve somehow managed to make you want to watch it sometime, I’m very interested in hearing your thoughts. Maybe you totally disagree with me, and think it was uninspired and not interesting at all. You’ve read my review this far, now let me hear your opinion.

Oh yeah, one last note. If you’re an artist, or you’re just interested in how Naohisa Inoue’s works, there’s a pretty neat step-by-step article on iblard.com that shows his painting process. The website looks kinda old (notice the “copyright 2003” stamp), but there seems to be a lot of good content available. Or, if you’re capable of reading Japanese, you could check out Naohisa’s personal blog, which is a lot more up to date!

PS: If you liked this review, you might also want to check out Thoughts on “My Neighbors The Yamadas“.