Just a quick update for now. This past week, from the 3rd to the 9th of March, a lot of artists have contributed their Ghibli-related artwork to The Ghibli Jam tumblr. I decided to join in, partly because I couldn’t find much love for one of my favorite movies of all time – My Neighbors the Yamadas. So I drew the whole family! Well, almost… I realize now that I forgot the dog! Here’s a link to the Tumblr post. 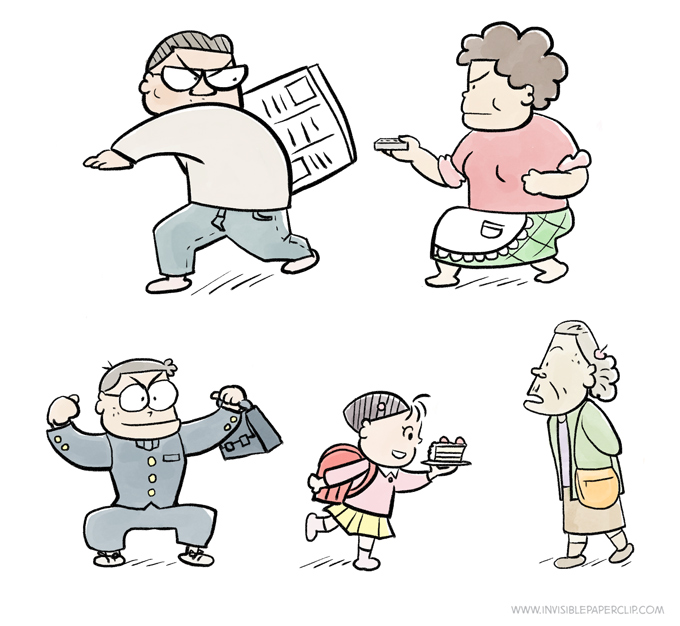 If you haven’t watched the movie, here’s a semi-long review I wrote some time ago, just in case if you’re interested in my thoughts about it (no spoilers). 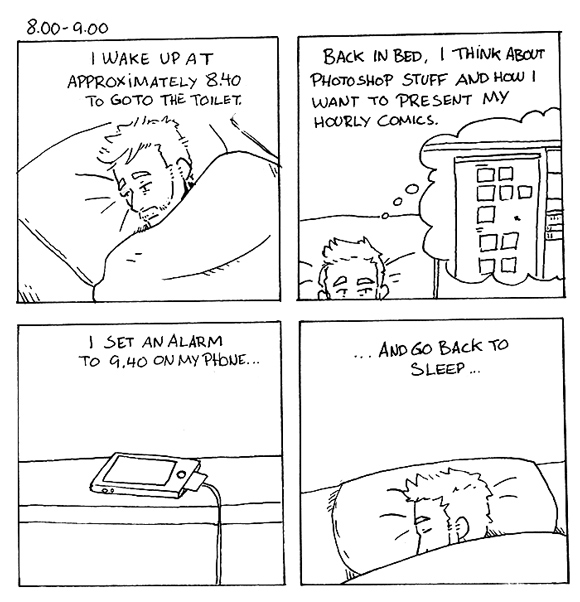 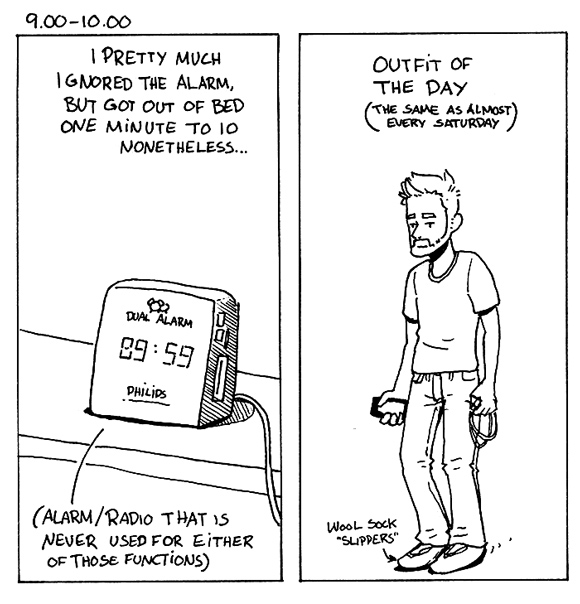 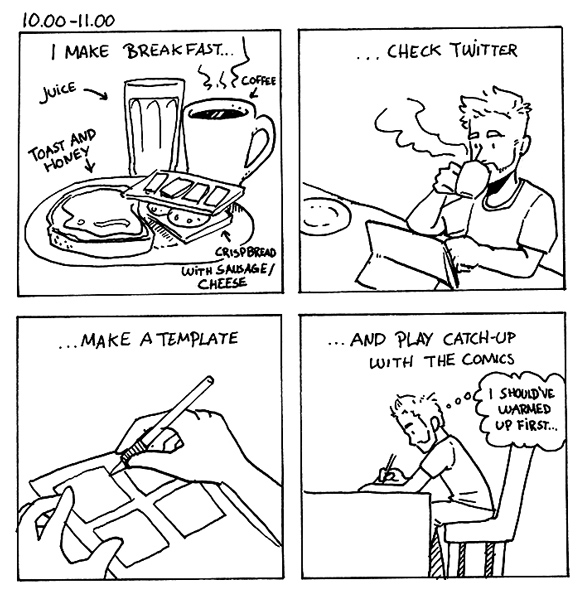 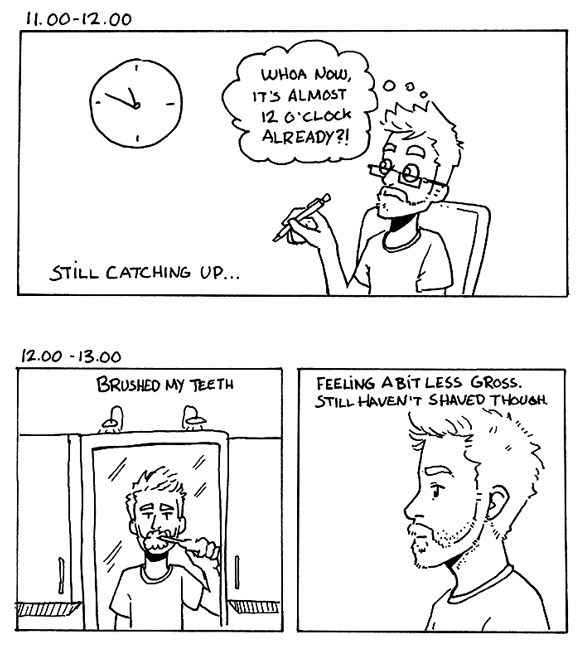 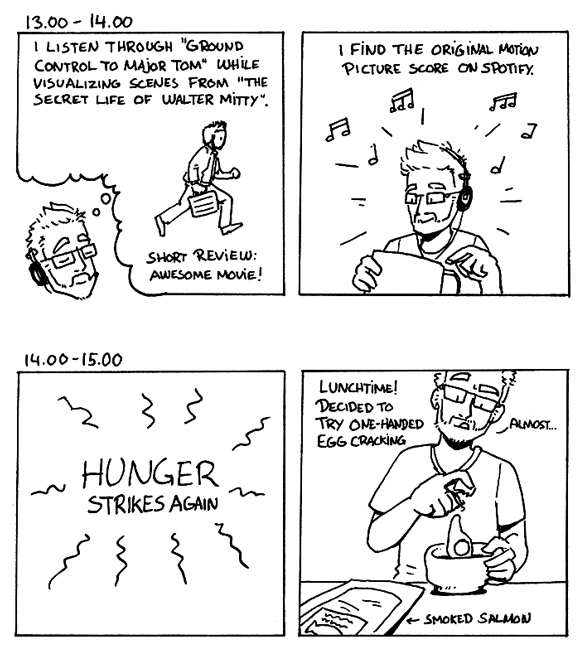 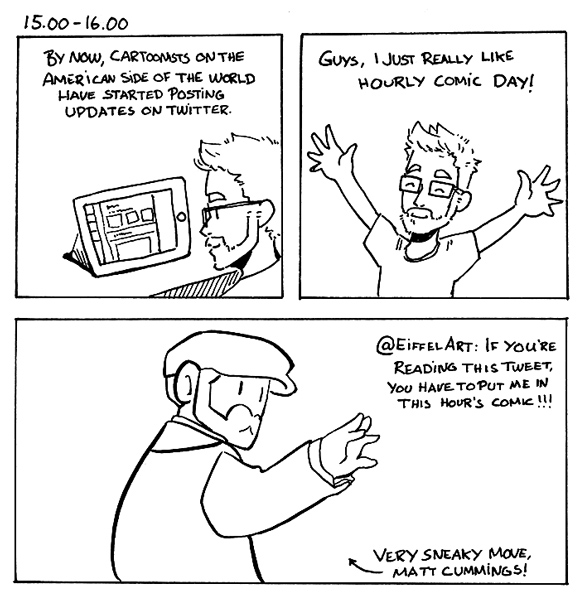 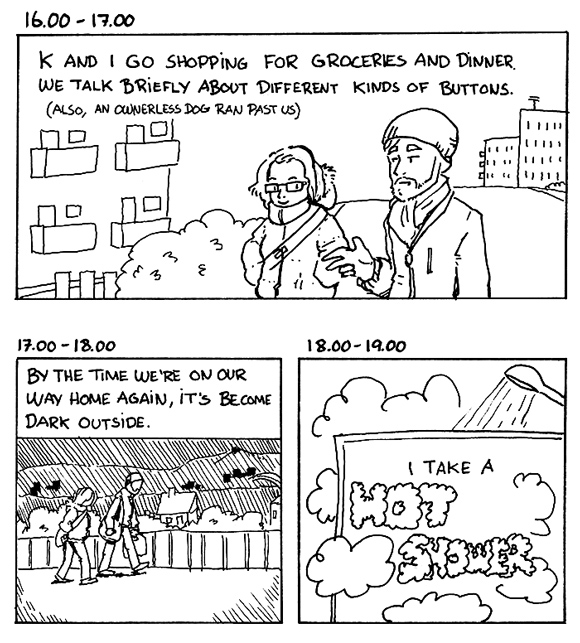 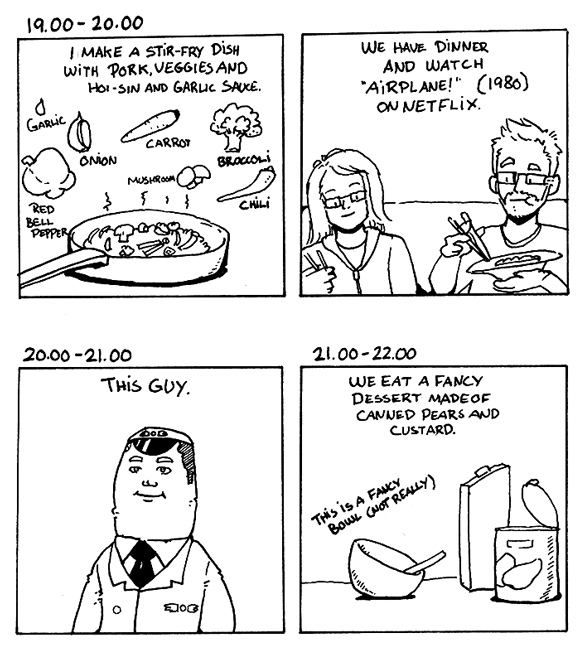 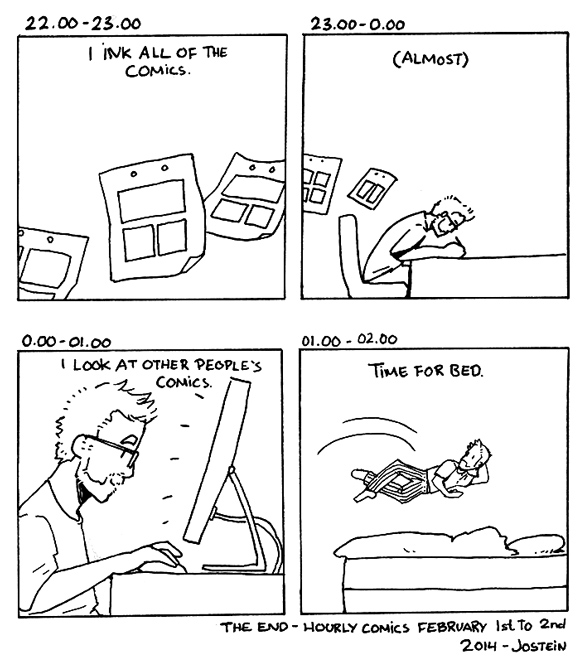 That’s it! Thank you reading! Not too exciting, but it was fun (and exhausting) to draw. Shoutout to Matt Cummings (@EiffelArt), who got included in the comic through that sneaky tweet.

Update: Here are some of my favorites from Hourly Comic Day 2014. I definitely recommend checking them out!

I had the pleasure of being the first featured artist in a series called “The Uprising”. It includes an interview where I talk about my influences and my favorite artists. Please check it out if you’re interested!

I’ve been working on a few character designs based on “Ciphers”, which is a sci-fi novel by Mary, the author of the very same blog I mentioned. Now, I could say that Mary is an aspiring writer, but that would be wrong, as she’s clearly way beyond the “aspiring” stage. “Ciphers” is a novel aimed at an audience in the 18-30 age bracket (New Adult), and the story revolves around Brid and Siph, a tomboyish linguist and half-alien guy with a considerable temper, respectively. 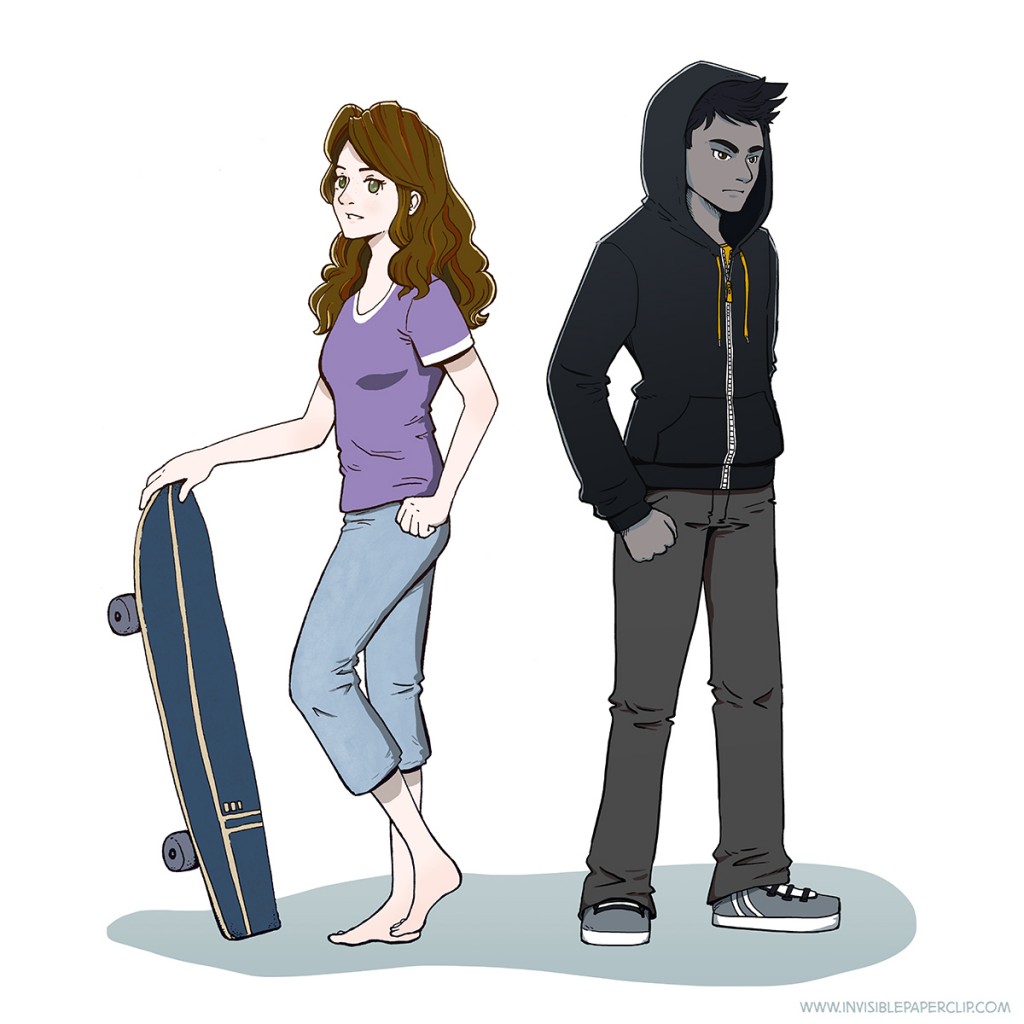 Mary is not only a proficient writer, she’s also worked as an English teaching assistant in Naju, South Korea, and is currently working and living in Osaka, Japan. There are several honest and vivid anecdotes from her experiences as an American abroad on her blog. She also blogs about everyday life, writing and her passion for language. 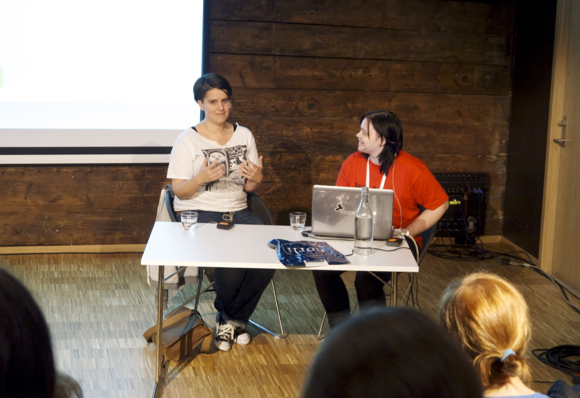 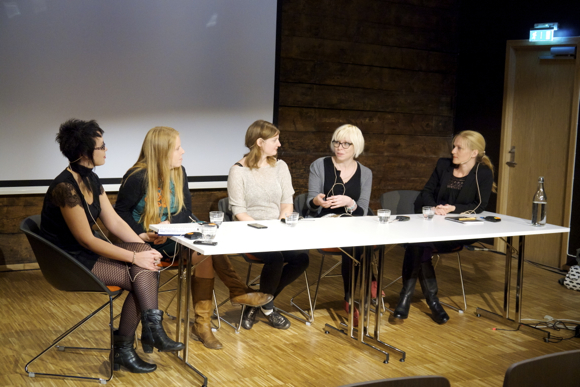 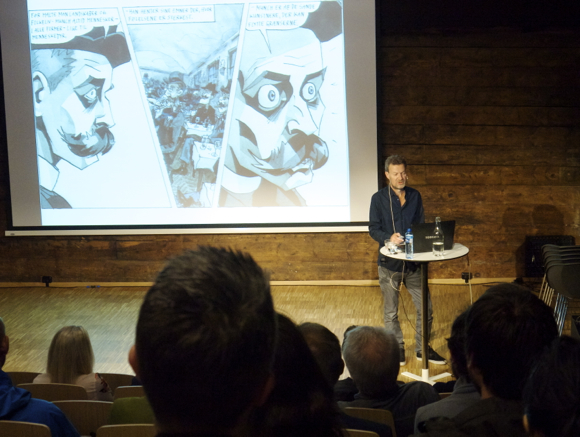 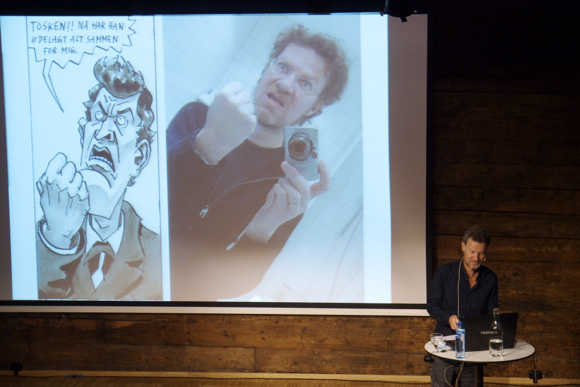 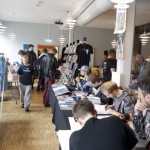 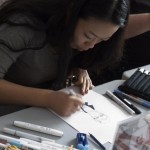 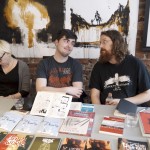 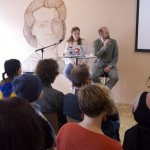 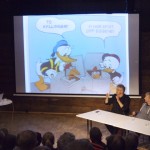 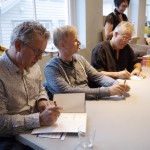 (Most of this post was written on Friday 13th of September 2013, the opening day of the Raptus International Comics Festival in Bergen. I’ve taken the liberty to finish this post in the same way I started writing it, even though I post this on Sunday the 15th.)

This is a short write-up of my personal experiences from Raptus International Comics Festival 2013. Today was the first day of the festival for me. I missed the official opening, but I got there in time to attend a few late afternoon talks. And, of course, to peruse comics and spend some money. 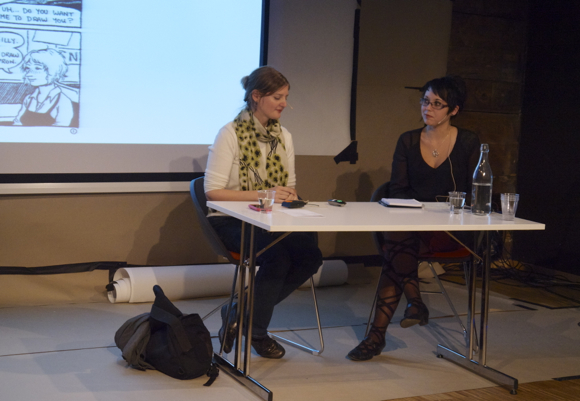 I went to listen to an interview with Sarah Oleksyk (website/tumblr), who is a storyboard artist working on Regular Show. She talked about how she at an early age wanted to be a cartoonist, and how she developed her style through making autobiographical comics. She studied illustration in university, while working on her cartooning in her spare time. An interesting fact was that comics were looked down upon, and not even taught, at her university at the time.

My favorite part of the interview was when Oleksyk (sitting to the left in the photos above and below) explained how a storyboard artist works. She described in detail the process from initial outline of the plot, to how she collaborates with another storyboard artist on the sketches and the dialog (Regular Show episodes are always created by a pair of storyboarders working together). The final step is to make a finished polished version of the storyboard so that it is “legible” for the animators. During her presentation, Oleksyk also showed the audience her workspace, and talked about her comic book named Ivy, minicomics, and the importance of warm-up sketches (tip of the day: doing warm-up sketches is very important!). 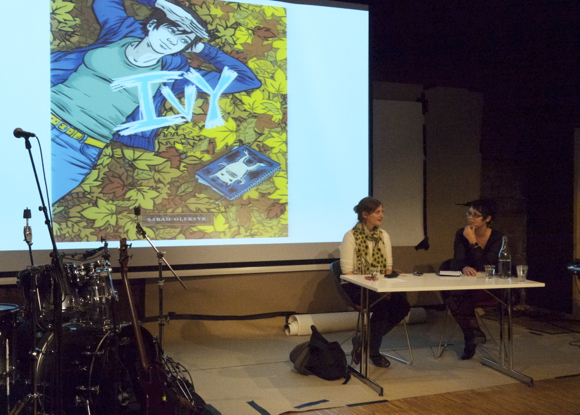 After the interview, I stopped by Oleksyk’s signing table and bought a signed copy of Ivy. I awkwardly asked her if she could sign my Moleskine notebook that I’m hoping to fill with autographs by comic artists. To this day I’ve actually only had one sketch and signature in it (hey, you’ve gotta start somewhere). She was very nice and drew a character from Regular Show for me as well.

I also managed to catch a part of an interview with Lene Ask. She talked about her autobiographical comics, and presented a part of her new project based on old letters and photographs related to early Norwegian missionaries on Madagascar. The event itself was very informal, and there were a lot of jokes exchanged between interviewee and interviewer (Ida Larmo, another Norwegian cartoonist and illustrator). The latter had recently become a mother, and was keeping an eye on her baby in her partner’s arms, who were also in the audience.

At one point, the baby started crying. Out of necessity, Larmo had to breastfeed her baby when finishing the last questions of the interview. This all happened on stage, in a very classy manner in front of the audience. Hilarity and laughter ensued, in particular after Larmo had asked if anyone else were in need of some milk. It was a classic “you had to be there” moment, and I’m sorry for not having a better way to tell the story.

One downside of today has been the feeling of constantly standing in someone’s way. The venue is very nice, but also very impractical. There’s a lot going on, and a lot of people milling about, especially in between the events and talks. And to get from one room to another, you have to go through crowded corridors and narrow doorways. Also, you can only fit about two or three people standing beside each other in the lanes in between booths, so it can get awkward if you want to stop and browse the items on sale. Apart from this, I have to say that today was an invigorating start of a great comics festival.

My guest comic, “Quest”, was posted on the Boumeries webcomic today! I’ll just post it here too, but you should check out Boum’s site as well. She’s got a growing archive of funny comics. Among other things, video games (perhaps Zelda and RPG’s in particular) and toilets are recurring themes, which is why I decided to combine the two to make this strip.