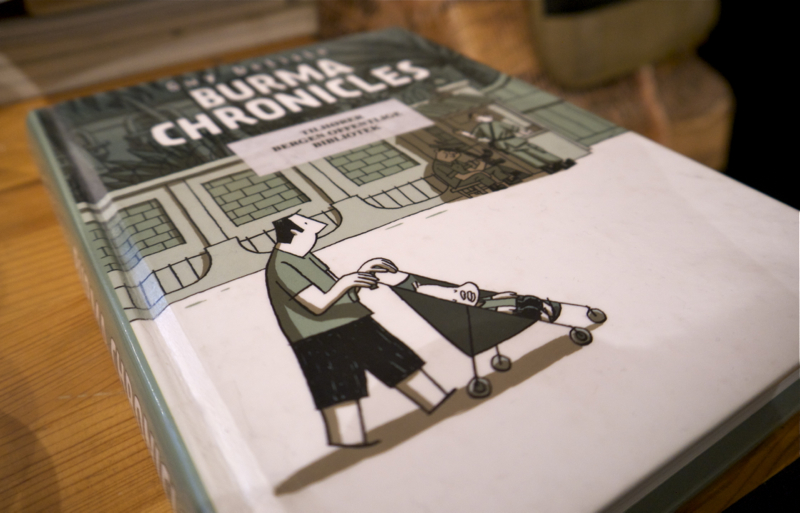 I finished reading Guy Delisle’s travelogue from his year in Burma (Myanmar). The book is called “Burma Chronicles” (2008) and is the third book in the familiar, cartoony style of Delisle’s travelogues. If you’re interested in checking them out, you might want to read my review of the first two books.

I have to say that I’ve been thoroughly enjoying Guy Delisle’s delightful observations. First of all, this book is an educational trip into how the situation in Burma was a couple of years ago. Secondly, there are a lot of comical situations and descriptions of the daily life of a small family (Delisle, his wife Nadége, and their baby, Louis) in a tropical country. For example, a power outage becomes a very specific problem when you’re not used to the blistering heat, and rely fully on air-conditioning to keep cool. The book is loosely partitioned into sections, with the upper left panel of a section bearing a title and an illustration of something related to the story. I like this way of telling the story in episodes, and still keeping it more or less chronological from start to finish. Delisle is nonetheless a master at using the possibilities of telling a story in comic form. During a side-story where he finds a long lost pen nib in his inkwell, we see him peering over the shoulder of a younger version of himself in a flashback. He then proceeds to loudly criticize the work he was working on at the time. His younger self retorts with a very fitting “Screw you. I can do whatever I like”.

A big topic which gets revisited several times is non-profit organizations, among them Médecins Sans Frontières (Doctors Without Borders). It is also made clear that NPO’s like Médecins Sans Frontières are very much needed, as the health care system in Burma is one of the worst in the world. Delisle’s wife, Nadége, is a part of MSF. Delisle himself is given a chance to join her on a mission, and his account of the trip gives an insight in exactly how the MSF worked to help the population in rural areas of Burma. This episode also involves extremely uncomfortable bus rides, and an unfortunate incident of stomach sickness. Just to mention a few of the not-so-great experiences he has included in the book.

Delisle writes and draws what seem like very honest stories, which I also believe they are. I mean, it’s the small, trivial stories that make travelogues, and in particular Delisle’s, so enjoyable to read. In very related news, I’m looking forward to get my hands on Chroniques de Jérusalem (Jerusalem: Chronicles from the Holy City) when it comes out in April…